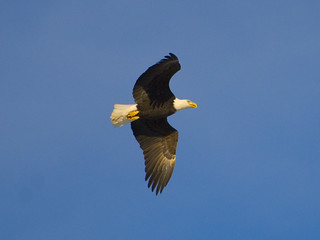 Our beloved Decorah Eagles might want to consider seeking expatriate asylum status outside of the US. Nearly 40 years after President Nixon signed the Endangered Species Act into law, Tea Party senators led by Senator Rand Paul (R-KY) introduced S 1731 last week, seeking to dismantle existing environmental conservation law. If signed into law, the proposed bill will move endangered species protection to the states on an opt-out basis, whether or not the states want this, and will require ‘delisting’ of all species, endangered or not, every five years.

The goal is to kill, drill, and pave while padding moneyed interest pockets by removing any environmental protections whatsoever, and then lie to the public every five years by publishing a new fake ‘delisted’ list, to give the appearance that things are going well. In a press release titled, Tea Party Bill Would Eviscerate Endangered Species Act, Center for Biological Diversity’s Brett Hartl explains,

The bill would eliminate all protections for the critical habitat of endangered species and allow state governments to effectively veto any conservation measures designed to protect an imperiled species within their respective state. Meanwhile federal wildlife agencies would need to complete onerous accounting reports to estimate the costs of protecting endangered species rather than completing tangible, on-the-ground conservation activities to protect species and the places they live.

“This bill would devastate species protections and open the door to log, mine and pave some of the last places on Earth where these animals survive,” Hartl said. “It’s a boon for profiteers like the Koch Brothers but will rob every American who values wildlife and wild places.”

In its 40-year history, the Endangered Species Act has been more than 99 percent successful at preventing extinction for wildlife under its protection and has put hundreds of plants and animals on the path to recovery, including bald eagles, grizzly bears, whales and sea turtles.

Despite this successful track record, the bill’s most extreme provision would require that every five years all protected species be removed from the list of threatened and endangered species, eliminating all legal protections. No matter how close to extinction they might be, every listed species would then have to wait until Congress passed a joint resolution renewing their protections under the act for another five years. Five years later, this process would start over again, eliminating all protections until Congress passed another joint resolution.

The Tea Party is legendary for its underhandedness in environmental issues. For example, to speed up oil and gas drilling, the House has approved a bill that would, among other things, force environmental protesters to pay a $5000 fee to get a permit, to protest drilling. Russia Today explains further in its article titled, US House approves $5,000 fee for official drilling protests, less federal authority over fracking:

In addition, the bill would allow for automatic approval of onshore drilling permits should the US Department of Interior (DOI) take over 60 days to act on an application. DOI would also be required to begin commercial leasing for development of oil shale – not to be confused with “shale oil” – which is rock that must be heated to about 1,000 degrees Fahrenheit to yield crude oil.

The controversial practice has been largely nonexistent in the US since the days of President Herbert Hoover, who prohibited leasing federal lands for oil shale, “the dirtiest fuel on the planet,” according to the Natural Resources Defense Council. The oil shale process “takes a large amount of energy and money, as well as 3-5 barrels of water per barrel of oil produced, a dangerous issue in the parched West,” according to Jessica Goad of the Center for American Progress’ Public Lands Project.

Forty years ago, our nation’s living symbol, the American Bald Eagle, was listed as endangered, due to overuse of the pesticide DDT, illegal shooting and habitat destruction . It was delisted in 2007, as a direct result of conservation efforts. These efforts are now being challenged, by a group of people who, while claiming not to like ‘big government,’ actually hold positions in the same ‘big government’ they claim to hate. Not only do they want big government, they favor a police state version of it, that charges people a fee to exercise a first amendment right to free speech, even while seizing that right themselves, to lie freely about the status of any given class of wildlife, every five years. That is not a democracy.

On endangered species, from The Guardian:

After Life: a photographic perspective on endangered species