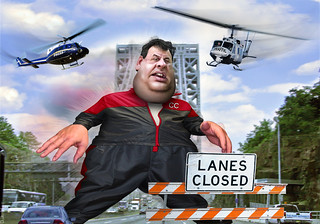 ‘Chris Christie Whoppers on the Bridge’ image by DonkeyHotey on flickr

Oz, aka The Land of Oz: New Jersey

The Munchkins: The People of Hoboken, New Jersey

Glenda, The Good Witch of the North: Mayor Zimmer’s desire to get relief funding to her beautiful and densely populated town, Hoboken, that was eighty percent underwater and damaged, during Hurricane Sandy.

The Yellow Brick Road: The process that Mayor Zimmer must go through, to qualify and get Sandy relief funding to the town of Hoboken, New Jersey.

The Lion: The Mayor of Fort Lee, the people of Fort Lee and the commuters of Fort Lee who got stuck in that fucked up traffic jam.

The Tinman: Infrastructure, the GW Bridge and The Sixteen Blocks in the North end of Hoboken that got shunned by that rigged study.

The Scarecrow: All the other mayors, judges and people in elected positions who got fired, called names, voted off the island, taken off the bench for no reason, kicked to the curb, and thrown under the bus by the Christie administration and then flamboyantly blamed, for the failures of the Entire Human Race. So, the Scarecrow is: him, her, them, those other people, and all of the mean terrible lying predatory animals out to get the Christie administration and destroy it by next Tuesday, including the vast, overarching left-wing conspiracy. In other words, the Scarecrow is anyone other than Governor Christie, and his administration.

The Wicked Witch of the West: The Christie Administration. Then again, maybe it’s just him.

The Wicked Witch’s Flying Monkeys: The Port Authority people who email stuff like, “Time for some traffic problems in Fort Lee,” and various and sundry other people from the cabinet of the character mentioned above, who go out in the field and do the governor’s actual wet work, which includes telling the mayor of a giant, beautiful town that if she wants any Sandy relief money from the…get this: Federal government…there are strings attached, or some version of that.

The Flying Monkey Attack: Some act of revenge. It’s getting to where these things are announced ahead of time, like, “I’ll get you my pretty. And your little dog to, Ah-hahahahahaaaaa.” Or, this.

The Wizard of Oz: To be announced