Saturday Art: The Oldest Known Bone Flute and the Venus of Hohle Fels UPDATED BELOW

Nicholas Conard, an archaeologist at the University of Tubingen in Germany led a team of archaeologists who discovered the oldest known flute in the Hohle Fels cave in the Ach Valley in Germany in September, 2008. He was the lead author of a study about the flute and other discoveries published in Nature in June, 2009.

The flute, which is approximately 35,000 years old and recovered in 12 pieces from an area approximately the size of a large dinner plate, was made out of the hollowed out wing bone of a giant vulture and measures nearly 22 centimetres (8.7 inches) long and 2.2 centimetres (one inch) in diameter. There are precise markings next to four of the five finger holes that likely were used to indicate where to place them. Two deep V-shaped notches are carved into the end that the musician blew into.

Fragments from three ivory flutes unearthed at the same site, along with nearby instruments not quite as old, suggest that humans who had then only recently migrated to the Upper Danube enjoyed a rich musical culture.

And a stunning female figurine from the same period found only a couple paces from the bone flute, reported last month, points to a broader artistic flowering.

Indeed, the area within the cave that yielded the flutes reveals a veritable artist’s atelier.

There is debris from the flint tools used to chip the instruments; traces of worked bone and ivory from mammoth, horse, reindeer and bear; and burnt bone, one of the ingredients — along with minerals, charcoal, blood and animal fats — used by Stone Age humans for cave painting.

“We can now conclude that music played an important role in Aurignacian life in the Ach and Lone valleys,” commented Nicholas Conard, a professor at the University of Tubingen and lead author of the study.

K. Kris Hirst of About.com Guide describes the female figurine, which is known as the Venus of Hohle Fels:

The Venus of Hohle Fels has no head, like many other examples, but it does have a (partial) ring where the head should be, suggesting that it was suspended from a cord. The figure measures 59.7 x 34.6 x 31.3 mm, and it weighs 33.3 grams.

The figure is short and squat with a visible waist and large breasts and buttocks. Deeply incised lines cover the abdomen to the pubic triangle. These incisions cover the back and, Conard believes, may represent clothing.

The legs are short, pointed and asymmetrical; the buttocks and genitals depicted in anatomically-correct detail.

Ivory working at Hohle Fels is abundantly in evidence, as it is at other sites belonging to the lower Aurignacian of this part of Germany, suggesting that figurine carving was a characteristic of Aurignacian people right from the beginning.

Go here to see views and photomicrographs of the Venus of Hohle Fels.

UPDATE: Jumpin’ Jiminy. Just came across this article in Past Horizons, Adventures in Archaeology and guess what. The bone flute and Venus of the Hohle-Fels are thousands of years older, dating back to 42,000 to 43,000 years ago, which predates a major period of glaciation that began around 40,000 years ago.

Max Chamberlain made an astonishing discovery two years ago while on a dig in the Guatemalan jungle excavating Xultun, the largest city in the Mayan empire. He was an undergraduate student at Boston University working under the supervision of Professor William Saturno, an archaeologist at Boston University.

Although Xultun was discovered in 1915, it had not been professionally excavated by archaeologists. Occasional looters searching for treasure had left their calling cards, however, in the form of many deep trenches that they dug to find and search buildings now located below ground and concealed by dense jungle growth.

During a lunch break, Chamberlain decided to explore a trench to see if he could find any sign of paintings on exposed walls. Saturno assured him that he would not likely find any paintings because they would have disappeared during the intervening centuries due to water, dirt, insects and encroaching tree roots. Professor Saturno was wrong.

While stumbling and crawling through the trench, he found an exposed wall with two red lines.

A quick excavation revealed the back wall of the building — replete with a mural of a resplendent Mayan king, in bright blue, adorned with feathers and jewelry.

Saturno’s team brushed off the wall and “ta-da!” he said. “A Technicolor, fantastically preserved mural. I don’t know how it survived.” Saturno immediately e-mailed contacts at the National Geographic Society, which agreed to fund a full excavation of the building.

The mural is the first Mayan painting found in a small building instead of a large public space. And it’s also the oldest known preserved Mayan painting.

They also uncovered other figures, including a scribe dressed in orange and three seated black figures wearing white loincloths and white pendants dangling from their necks.

They also found a lunar table showing a 4,784-day cycle of the Moon’s phases and a 7,000 year table showing Venus-Mars alignments. The latter find not only is important for its own sake, but it dispels the notion that the Mayans predicted the world would end this coming December 21st because they were calculating events that would occur long after that date.

Please take a moment to look at the exquisite gallery displaying photographs of the figures in the Washington Post article.. 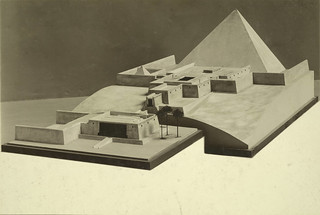 I recommend to all of you art enthusiasts the Heilbrunn Timeline of Art History. The site is part of the Metropolitan Museum of Art and it provides you with an interactive timeline of art history.

There are 300 timelines available to peruse at your leisure, so this is a great site to bookmark and periodically return to view.

Each timeline includes “representative works of art from the Museum’s collection, a chart of time periods, a historical overview, a list of key events, and related content.”

The site also presents 900 thematic essays that ” focus on specific themes in art history, including artistic movements and periods, archaeological sites, empires and civilizations, recurrent themes and concepts, media, and artists.” Each thematic essay includes links to related themes and timelines and often demonstrates the cross-fertilization of civilizations.”

You can examine and compare art from any of the ten geographical regions of the world during any of the time periods ranging from 8,000 BCE to the present. The regions are North America, Central America, South America, Africa, Europe, West Asia, Central and North Asia, East Asia, South and Southeast Asia, and Oceania. Just click on any icon exhibiting a small photo of a representative sample and it will enlarge to a splendid close-up photograph of the sample with “supporting material, including when available, links to technical glossaries on CAMEO and artist biographies from Oxford Art Online.” In all, there are 6,000 photographs available to examine.

Cross Posted from my law blog.

Saturday Art: Charles Laughton In I, Claudius, The Greatest Film That Never Was

Charles Laughton is one of my favorite actors. He played the Roman Emperor Claudius in the film I, Claudius.

The film is based on the novel of the same name, written by Robert Graves. According to the Wikipedia entry, Graves claimed that Claudius visited him in a dream and told him to write the true story about his life, which Graves proceeded to do.

In 1998, Modern Library ranked I, Claudius as the 14th best English language novel out of 100 written during the 20th century.

Claudius was the 4th emperor of Rome (Augustus, Tiberius, Caligula, Claudius). In 41 AD, at the age of 49, he succeeded Caligula, who was assassinated by members of the Army.

Historically, Claudius’ family kept him out of public life until his sudden coronation at the age of forty nine. This was due to his disabilities, which included a stammer, a limp, and various nervous tics which made him appear mentally deficient to his relatives. This is how he was defined by scholars for most of history, and Graves uses these peculiarities to develop a sympathetic character whose survival in a murderous dynasty depends upon his family’s incorrect assumption that he is a harmless idiot.

There is an absolutely marvelous scene in the film when Claudius is confirmed as the new emperor by the Senate. It begins with Laughton lounging on the throne looking like an imbecile while members of the Senate openly mock him. I could tell you the rest, but I don’t want to spoil it for you. Watch the master . . .

The film is called the greatest film that was never made because it was never completed. According to IMDB, Laughton was having trouble getting into the role and not getting much help from the director, Josef von Sternberg, when his co-star Merle Oberon was injured in a car accident. He then used her accident as an excuse to quit the film. All of the scenes that were filmed were saved and still exist. If Laughton was having trouble getting into his role, I certainly do not see any evidence of that in this scene.

Here is another scene with the incomparable Charles Laughton from the film, Witness for the Prosecution (1957), directed by Billy Wilder and starring Charles Laughton, Marlene Dietrich, and Tyrone Power. Wilder wrote the screenplay from a mystery novel by Agatha Christie. Dietrich, who also is one of my favorites, is sensational in the scene while Power is relegated to looking back and forth between the two of them.

The scene takes place in a courtroom, presumably the Old Bailey in London. Laughton is the criminal defense attorney, or barrister as the Brits say, He’s cross examining Dietrich about a certain hand-written letter to a man named Max and he has a problem authenticating it. Can he solve the problem? Watch and see . . .