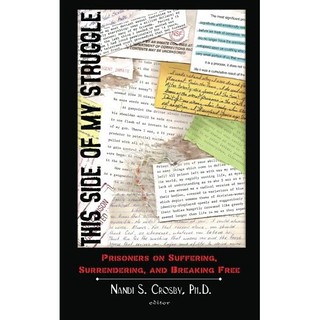 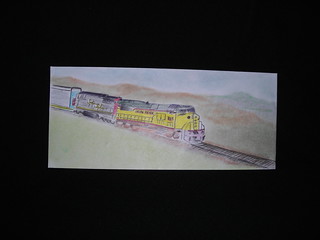 Note: While Fred is completing a post on expert witnesses, here is a nonfiction post on incarceration. This essay is published in an anthology along with two others. The online essays are each stand-alone, and they alternate between jail and prison in no particular order. 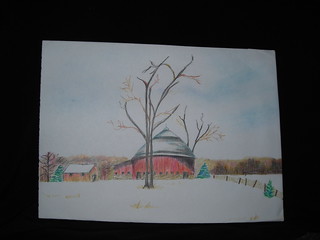 barn at winter by Crane-Station on flickr. jail art done at Ricky’s World.

In the depths of winter I finally learned there was in me an invincible summer.
-Albert Camus

Meg announces to the cell that she is on her period.

Meg lives in a motel on the outside, where she trades her body for drugs. She has nine children; many of them were born while Meg was in jail. After Meg is released and after she gets her ‘dick,’ her tenth child will be born in prison, but we do not know this yet.

She has made the comment about getting some ‘dick’ to be mean, because she knows that the rest of the cell occupants are serving lengthier sentences than she has ever had to serve, and that we will be unable to know a man’s touch or have sex, and she will.
When the announcement about dick does not elicit much of a response, Meg starts in on Christie, who, having been denied drug court and now faces 24 years for nonviolent drug-related charges, is desperately depressed. Christie stays on her bunk all the time now, crying.

One of Christie’s felonies, by the way, is for a cold check in the amount of something like one dollar and seventy-two cents, whereas Meg, who will walk out of the jail and get some dick and get pregnant two weeks from now, has a lengthy history of theft and possession charges that, for some reason, she has never had to worry much about, in terms of serving any time.

Rather, during her frequent yet brief accomodations in the McCracken County Jail, she busies herself with the passive-aggressive practices of constant manipulation and torment of fellow inmates who will be serving lengthy sentences entombed in cement with no hope. Each time, Meg leaves, and gets some dick, among other things.

Meg says to Christie, “I think you are overreacting.”

“I can’t help it,” says Christie. “I’m not overreacting. I feel really, really, really bad inside. People notice that there is something wrong. I can’t quit crying. I don’t mean to be such a bitch about it. I just don’t know what to do about it. I sleep 15 hours a day now. I can’t handle this.”

“It’ll be all right,” says Meg, who, two weeks from now will be having sex.

Sally is on the phone, calling her mother “a fucking whore.”

Sally calls her mother every five minutes or so, and treats her like a disobedient child. She says, at maximum volume, “I love you! Shut your fucking mouth, you’re nuthin’ but a lazy whore.”

Sally’s mother shouts back. Sally also screams at her 17-year-old son on the phone. She holds the receiver and says to us, “He ain’t got his books for home school yet. Can you believe that shit? My mother ain’t even got his books! She ain’t nuthin’ but a useless whore, don’t do nuthin’ but lay on her back all day.”

Because Sally is currently a guest in the jail, her son is supposed to be homeschooled by Sally’s mother, who is addicted to Vicodin and who never completed the eighth grade.

The son is also apparently very sick, with some kind of severe illness that Sally cannot define. Munchausen by Proxy I think to myself, although I never say it. I think this to myself privately because Sally also self-reports severe, undefined illness in herself, and the mother is dysfunctional, and there is too much collective severe-yet-undefined illness in a young group of closely connected people. Sally looks healthy and robust. It is Christie, crying on her bunk, unable to get up, that I worry about.

I like Sally, and we get along well. I do not agree with how she speaks to her mother or her son, but Sally is amicable to fellow inmates, and she has a delightful sense of humor.

Meanwhile, Meg has come back to the cell from a brief visit to the jail library. The library is a jail cell with mostly paperback romance novels and religious materials, and a remarkable dearth of literature. Meg sets an arm load of romance novels onto the steel table, and then starts gossiping about YaYa, who was in the library, gossiping about Amy. YaYa is not here to defend herself.

Meg says, “I just wanted to hit her.”

I say, “She’s pretty big. Maybe that is not such a good idea. You know, hitting her.”

“The bigger they are, the harder they fall.”

Meg taps on the wall to the cell next door, to arrange for her delivery of drugs for the evening, in the form of the inmate-next-door’s psych meds. Everything went okay for her first delivery, and I secretly hope that everything will continue to go okay, because when Meg is on someone else’s psych meds, she usually shuts up.

They make some arrangement.

Later, I am doing exercises on the floor next to the steel door when the steel door flies open, nearly hitting me, and there stands Tiffany, the sergeant, and she is irate. She says, “Who got the note from Carter!?”

“Who got that note from Carter!?”

Just then, we realize that Meg’s drug arrangement has not gone as planned. Carter, the inmate next door who was on psych medication, had wrapped two pills in paper and ‘fished’ them underneath her cell door and into our cell, under the door. But it did not work, because the note got stuck.

We watch while guards come to the cell next door, remove Carter, and take her to the hole.

Meg smiles, giggles, and laughs, as though she had nothing whatsoever to do with the note or the pills in the note. She dismisses the whole incident, and gets on the phone to make arrangements with someone on the outside to smuggle cigarettes into the jail. Later, she tries to get me to make an appointment with the nurse and lie about some ailment, so that Meg can get Tylenol pills, or any pills. I refuse.

When I refuse, she makes fun of me, of my trial, of my conviction, of my lengthy sentence, and of the fact that she will be getting dick two weeks from now and I will not be getting any dick until it is too late for me to have sex, because I am too old.

In my mind I try to come up with reasons for meanness and lack of empathy among warehoused humans in the same predicament, and I wonder if people in the train cars during the holocaust were mean to each other. What is it, exactly, that brings out such hate? Perhaps it is overcrowding or demeaning, dehumanizing treatment, or lost confidence in ‘the system,’ or female jealousy, mental illness, lack of stimulus, or hormones, or frustration and separation from love, touch and family. Maybe it is a combination of everything.

I fold my cranes out of scavenged paper. I move them around. I adjust the towel on my head. I go into the bathroom and climb onto the steel toilet and look through the slit to the dumpsters outside.

I return to the steel table. I put the tiny cranes with the big cranes.