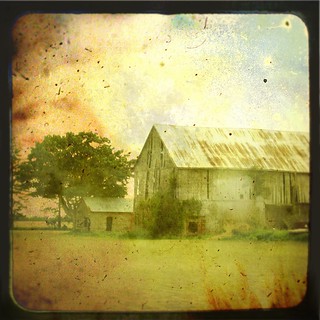 This is a true story from the Great Depression, as told by Letty Owings, age 89. It is a true account of days on a small Western Missouri farm during the drought of the 1930s.

Mom had malaria fever and we had to have her outside. Old Doc Martin, the county doctor, had visited and given my mother quinine. He told us that we had to keep her cool, and that we had to have a block of ice. On the rare occasions that Doc Martin visited, he left with a chicken because we had no money to pay him. Sometimes, he politely declined to take a chicken.

After the doctor left with his chicken, we decided to move outside because we did not have ten cents to buy a block of ice for Mom. The farm houses during the Great Depression had small windows because there was no insulation and no such thing as double-paned windows. Some rooms in the farm houses had no windows at all; there was no breeze in the house. We had no electricity and no fan.

We moved a mattress outside to underneath a tree for Mom. Pop and I moved our comfort and pillows outside as well, and we stayed next to her. We did not have mattresses. There was only the three of us now because my siblings were older and they were gone. That left Mom, Pop and I to tend to the farm. Mom was born in 1889 and was now 45 years old. I was nine. My responsibility now was to care for Mom and for the small animals on the farm. Pop told me not to worry about the big animals, so, during the day, Pop tended to the fields and to the cows and horses, and I tended to Mom and to the chickens, ducks and geese.

On her mattress, Mom would rave and cry and thrash. She was out of her mind and she didn’t know me. She had a roaring fever and there was nowhere to get cool. It did not rain that year until the first snow fell in the fall. Since we did not have ice, I would lower rags in a bucket on a rope into the well to cool them, and then I would wash Mom’s face and hands with the cool rags. We shared the well with the snakes that had gravitated there out of thirst. The well was our refrigerator.

During that summer, also know as a historic Dust Bowl year, we had 53 days that exceeded 100 degrees. Today, every acre is planted, but back then there were not as many roots in the soil to stabilize it; the wind roiled up large clouds of dust. Every living thing on the farm was thirsty, and while my dad was in the fields I dipped well water for the chickens, ducks and geese, and also for Mom. We lived like this, just surviving, hour after hour, day after day. My mom was so sick there were days she didn’t remember.

One day, I thought my mom had died. She was unresponsive to me, and I was so scared. I ran, terrified, to my dad, who was plowing with the mule on the back forty (literally). Pop tied the reins- the mule was a good mule- he wouldn’t go anywhere- Pop tied the reins onto the mule and we both ran back to Mom on her mattress. I was too young to see my mother suffer and die like this under my care. I was so scared because I was responsible for her and if she died I had only myself to blame. Seeing my mother like that haunts and saddens me to this day.

Mom was not dead. She was very hot. We shook her and rolled her and washed her face with cool rags from the well. Eventually she recovered and learned to walk again, but the malaria symptoms recurred in the following years.

During those hot and dry days on the farm, it wasn’t just me and Mom. All of the animals were thirsty and hot- the cows, calves, horses,chickens, ducks and geese- I dipped the well water for them all. My dad was a saint. He never got angry and he never asked for help with the big animals. He told me not to worry, he’d take care of the cows and horses. Pretty much all we had to eat was cornbread, and Pop often made the cornbread out of cornmeal, soured milk and flour in the mornings. At some point, he was able to save enough to get some coal oil burners.

Mom lay on her mattress in her ragged dress and she cried. Pop washed her face and held her hands. His real name was Olando John, and there was never a better man the good Lord ever made.

note: The Dust Bowl years were three consecutive years of drought during the Great Depression. On the description “53 days over 100,” go here to view historic records compared to present day.

Malaria is transmitted by mosquitoes and caused by a protist.