Good afternoon. In the next few weeks, I will be uploading documents and footage from my case in Kentucky. It is the only case that I am aware of, in the entire country, where a DUI has been affirmed on appeal, and published as precedent, where blood analysis showed zero drugs detected and zero alcohol, and there was no impaired driving whatsoever. In other words, this case can and will be cited, in Kentucky, in future Sober DUI cases.

DISPATCHER: Central dispatch. This is Lou.
Could I help you.
MR. WILKEY: Yes, sir. This is Vernon Wilkey.
I live out here on Queensway Drive.
And there is a lady in a dark blue looks like a
Buick LeSabre. I’d say it’s a late ‘80s, early ‘90s model.
And I’ve got a license plate number. But she’s out here
walking around in my neighbor’s yard and everything
and writing stuff down, and she’d talked to him and
mentioned something about tar heroin and all that stuff.
DISPATCHER: Talked to who?
MR. WILKEY: My neighbor next door.

Walking around and writing in a book and mentioning something “about 218A,” a drug statute, which is what the dispatcher related to the officer, is considered criminal activity, in Kentucky, if you are from out-of-state, page 14:

Based upon the prior 911 call, during which the caller described a woman
driving a car that displayed Washington state license plates who was committing
criminal activity,

The stop and search of my vehicle and my person lasted nearly two hours, and was performed by three officers from two agencies. Since the tape was tampered with, however, the court of appeals only apparently viewed a brief portion. I will be uploading the original that I have, but I need to fix something on the computer first, as it will currently not play a DVD. Anyway, the court of appeals found and noted, in pertinent part, the following:

Two hours is reasonable, for the “brief” investigatory stop, page 14:

However, the
law is clear that a stop may only continue long enough for the officer to determine
whether his suspicions were correct.

Also on page 14, and this is significant. They conclude that I essentially stopped the officer, and insisted on the search. This is false. The evidence in in prior testimony, that I was not allowed to confront, and also, in the dispatch recording that was altered and tampered with, in chambers, on the morning of my trial. I will be presenting that. For example, the officer testified at the Grand Jury, but I was disallowed from questioning him on any prior testimony:

This disallowment cleared the way for suborned perjury at trial and the following finding in the affirming opinion:

and the undisputed fact that Leatherman pulled to the side of the
road and stopped before Deputy McGuire activated his emergency lights,

Now, for the other significant findings:

We note that the record contains a videotape of the
cruiser cam video; unfortunately, there is no audio recording attached to the video.

This is false. The recording is clear, and I will show that. An altered version was sent to Frankfort.

This is the key part of the sober DUI. The Court of Appeals actually noted in the opinion:

A breath test and later blood tests revealed that there were no drugs or alcohol in
Leatherman’s system.

The DUI was solely based on this finding. The arresting officer had a thorough understanding of HGN and its connection to impairment. He told the Grand Jury, as would a scientist:

And it’s the same principle as if you were to spin around in a circle ten times and then check someone’s eyes. The room’s spinning. That’s the same–that’s the same way that we use to detect the presence of any kind of controlled substance, alcoholic beverages in a DUI arrest.

And she showed–she failed that. She showed all six clues of that.

The finding at page 5 of the opinion:

You might be thinking that the 2-hour search of my car, trunk, personal belongings, crotch, breasts, shoes and person in full view of passing traffic, and also the gas tank, and underneath the seats- a couple of officers on the tape actually disappear inside the car- may have produced illegal drugs. Wrong:

They did not find any illegal drugs during the search.

Deputy McGuire requested that a female officer respond to the scene to
perform a search of Leatherman. Paducah Police Officer Gretchen Dawes
responded, obtained consent to search, and performed a thorough search of
Leatherman, including the front and back pockets of her jeans, the rolled up pants
legs, and under her T-shirt. The search is depicted in the cruiser cam video.
Officer Dawes did not find any weapons or illegal drugs on her person.

The documents and footage that I will upload and share will show, among other things: suborned perjury at trial, and suborned perjury at the grand jury. Also- a secret meeting before trial in chambers, hidden from the docket and unknown to me at the time, where several motions in limine were decided, namely, that the rules of evidence would be suspended in my case and I would be barred from cross examining witnesses on prior inconsistent statements; ex parte juror contact post trial, and juror telephone home, work and cell numbers in the case file ahead of a reconstructed and falsified ‘prospective juror’ chart. Also- a secret post trial agreed order denying suppression based on trial testimony, that was written by the prosecutor four months prior to trial and faxed to my attorney, who hid that from me; and a crime lab tech testifying as an ‘expert medical witness’ – qualifying as an expert based on a 30-second internet surf of a lab tech site, where he downloaded two bogus articles and then assured my attorney. “I am your man!” Plus- just minutes before the secret meeting before my trial in chambers, recorded evidence was altered and deleted on 13 occasions, at 8:36, 8:37 and 8:38 AM specifically, and then a fake, prosecutor-generated ‘transcript’ was entered instead of the recording, for the trial.

In addition, I took the case all the way to the US Supreme Court for cert, which was denied, apparently with help from the United States Solicitor General. The petition had to do with the secret post trial agreed order denying suppression that was altered to reflect the new story told at trial, only the order, as I said, was penned four months before trial. So, they deceived the highest court in the nation as well. The Question presented:

Whether the Court’s order denying her Motion to Suppress Evidence, which was amended after the trial and included information presented at trial but not at the suppression hearing violated Petitioner’s right to be free from unreasonable Search and Seizure under the Fourth Amendment of the United States Constitution.

The United States Supreme Court was unaware, as was I until just recently, that the amended post trial order containing trial information was written before the trial ever took place.

I was shocked to discover only recently, in the case file, that the post-trial ‘third order’ was not sua sponte, as my appeal attorney and the United States Supreme Court was led to believe. Rather, it was written by the prosecutor and faxed to my attorney, who hid it from me, on September 27, 2007, four months before my trial. What is extra egregious about the third order is, the claim that I requested it. I had no way to request anything. I was in the hole, in jail.

We will break this analysis of this case down in excruciating detail, with documents, over the next several weeks to months, so look for posts, as we continue to cover other topics.

The lab tests are at the end of this post.

(For some outrageous reason, the labs seem to be scrubbed from my flickr photostream. No worries, they are screen grabbed and scanned and mailed all over the country.)

It is also notable that Kentucky flipped the bird to the Sixth Circuit, who allowed this woman to sue over her bogus DUI arrest:

Around this time, Throckmorton momentarily pointed his flashlight inside
Green’s vehicle. Throckmorton stated in his deposition testimony that he aimed the
flashlight’s beam toward the floor of the vehicle so as to illuminate Green’s face without
shining the light directly into her eyes. He “noticed that her pupils were constricted,”
which he thought “was kind of abnormal” because his training had taught him that a
person’s pupils will typically dilate in a dark setting. But, as he noted during his
deposition, “different chemicals or different types of drugs [can] hamper this process.
So. . . if you shine a light into somebody’s eyes, their pupils may stay completely dilated,
they won’t react to the light. Or else . . . they may be constricted, and you put them in
a low lighting and they won’t dilate.”

On July 24, 2006, four days before the Grand Jury met in my case, the exculpatory alcohol result was Faxed to the Commonwealth: 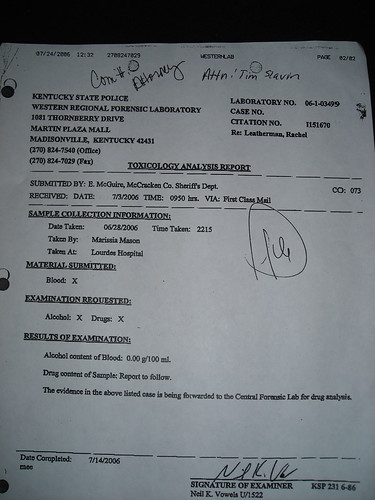 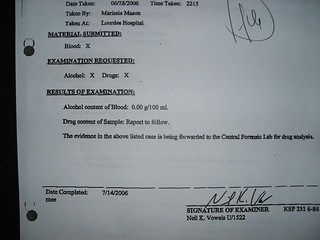 On July 28, my birthday, 2006, the Commonwealth suborned perjury at the Grand Jury hearing, saying (transcript linked above):

Q. We don’t have the blood results back?

Q. Did she admit to drinking at all?

A. No, I don’t believe she did. You can smell alcoholic beverages on a person.

Q. So you could smell it on her?

I was indicted for an alcohol DUI, when the Commonwealth had a 0.00 alcohol result, in its hand.

On September 25, 2006, the Commonwealth received the exculpatory blood test result for drugs, showing “No drugs detected” 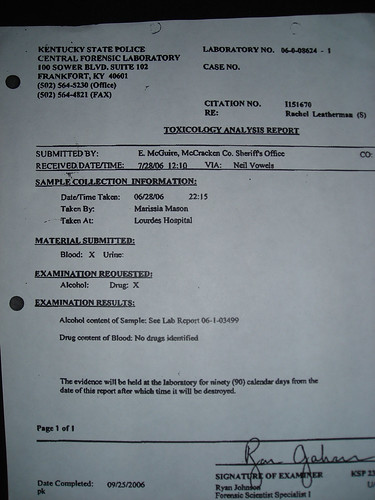 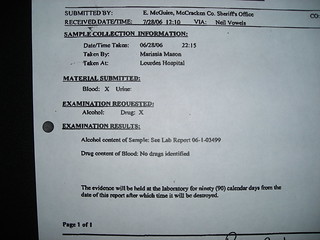 On October 16, 2006 the Commonwealth made me an offer of eight years. The Bill of Particulars with the offer was signed under oath: 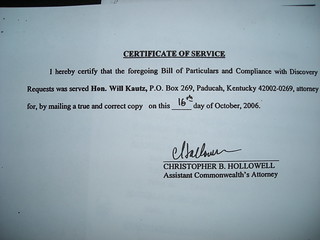 The problem is, the document claims that the Commonwealth had in its possession NO EXCULPATORY EVIDENCE. 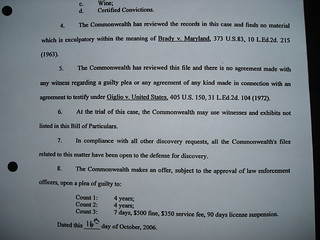 The document was perjured, and exculpatory evidence was hidden, in the hopes that I would plead guilty. I refused. But just so that you know, it is this sort of prosecutorial and public defender misconduct that results in a great many guilty pleas from people who are not guilty.