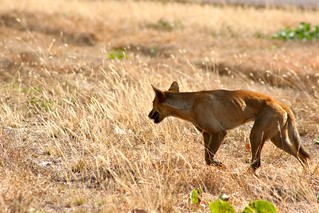 After 32 years, Elizabeth Morris, an Australian coroner, has finally corrected a terrible injustice to Lindy Chamberlain and her former husband Michael in the world famous dingo baby case by issuing a new death certificate in which she found that their baby, Azaria Chamberlain, was killed by a dingo that snatched her from the family tent in the Uluru campground near Ayer’s Rock on August 17, 1980.

Lindy saw a dingo leave the tent and when she checked on the baby she found her missing. Despite objective evidence that a dingo had taken her baby (campers heard a growl just before she cried out for help, paw prints in the doorway to the tent, dragmarks in the sand and canine hairs in the tent), most Australians did not believe her claim that a dingo had taken her baby.

The critical evidence in the case was testimony by James Cameron from the UK and Australian forensic biologist, Joy Kuhl. They testified that infant blood was discovered in the Chamberlain’s car on the dashboard, in a camera bag, on a pair of scissors, and a bloody handprint on Azaria’s jumpsuit. This evidence appeared overwhelming and most Australians applauded the verdict.

Later on, however, forensic serologists reviewing the evidence determined that there was no human blood inside the vehicle or on any of the items examined by Cameron and Kuhl. Instead, they only found red paint.

Kuhl admitted that she had only conducted a presumptive test for blood. She assumed it was human blood without conducting a necessary confirmatory test. Turned out that she had obtained a false positive for human blood due to the presence of copper oxide in the stains, which is ubiquitous to the area where the Chamerlands lived.

Cameron eventually admitted to a royal commission reviewing the case that he merely assumed the handprint contained human blood; he never actually tested it.

The commission exonerated the Chamberlains in 1987 and they were pardoned and compensated.

Nevertheless, despite multiple efforts since then to persuade the coroner to amend Azaria’s death certificate, they were unsuccessful.

Finally, they succeeded after Elizabeth Morris became the coroner.

Malcolm Brown in Darwin reported for the Guardian:

When coroner Elizabeth Morris ruled that a dingo had taken baby Azaria Chamberlain from her cot in the Australian outback 32 years ago, there were smiles, tears of relief and loud applause from the packed gallery at Darwin magistrates court. But there were no surprises.

There had always been a sense of unreality in the conviction of Lindy Chamberlain, a Seventh-day Adventist pastor’s wife and respected member of the community, for cutting the throat of her nine-week-old baby. To this day, nobody has ever advanced a plausible motive.

After Chamberlain’s conviction, there were other instances of dingo attacks on children – including the fatal mauling of nine-year-old Clinton Gage on Queensland’s Bribie Island in 2001 – and they provided the critical circumstantial evidence needed to end the Azaria mystery.

Chamberlain, though remarried, embraced her former husband Michael. They had both suffered the tragedy of Azaria’s death and knew they would probably still be together had it not occurred.

Lindy embraced her son, Aidan, who was six on the night of 17 August 1980 at the Uluru campsite when Lindy let out the chilling cry: “A dingo’s got my baby!” The two wept in each other’s arms. Even Morris could barely stifle a sob when she said: “Mr and Mrs Chamberlain, please accept my sincere sympathy for the death of your special and loved daughter and sister.”

It was the end of a case that had brought international attention over three decades and had been dramatised for television, film and stage. It had even been turned into an opera.