by Crane-Station and Frederick Leatherman

We continue our analysis of a published and affirmed Sober DUI and drug case, that is now precedent in the state of Kentucky. For the introduction, please go here.

What is a Chain of Custody?

Judges and lawyers use the word “chain” because an exhibit typically passes through several hands between seizure and the courtroom. Each person who handles the exhibit is a link in the chain of custody.

In the typical drug case, for example, an officer will seize a suspected controlled substance, weigh it and seal it in a bag with her initials across the seal. She will then fill out a drug-exhibit form listing the weight and describing the suspected controlled substance. She will take the exhibit to the police department’s evidence unit where it will be logged in briefly describing it and listing the date and time she presented it as well as her name and badge number.

The tech will sign it out and take it to the bench where he will open the bag, examine and weigh the substance. He will take a small amount to test, weigh what is left of the exhibit, record the weight, replace it in the bag and reseal the bag signing and dating the bag across the seal. Then he will conduct the testing procedure, record the results, and return the exhibit to the safe. The return will be duly recorded in the log book.

At some point, the exhibit will be logged out at the crime lab and returned to the police agency where it will be logged in to the evidence unit. It will remain there until trial when it will be released to the prosecuting attorney who will take it to court and offer it into evidence.

All competent defense counsel request copies of all of the documents that make up the chain of custody to make certain that every transfer is documented, the descriptions of the exhibit match, and the weights agree. They also request the lab tech’s bench notes that detail what the lab tech did with the exhibit.

If something is missing or out of order, defense counsel will object to the exhibit being admitted into evidence on the ground that the prosecution’s foundation is insufficient.

Any defense attorney who does not do this is incompetent.

Now to the documents. Crane-Station here, and in late 2012, after the United States Supreme Court denied cert in my case, I requested the chain of custody for the drug exhibit that a McCracken County Sheriff deputy seized on the night of my arrest, on June 28, 2006. After a two-hour search of my car and person at the roadside, that the Court of Appeals characterized as “thorough” revealed no illegal drugs, the officer arrested me and we went to the hospital for a blood draw. During the ride, my six-dollar wristwatch fell off, and slid through the crack at the back of the cruiser back seat, to the floor. I was handcuffed, and could not reach it. On arrival at the hospital, I asked the officer to move the seat and get the watch. I scooted forward on the seat, and he moved it. He then flashed something in front of my face- but then his hand was gone out of view. He nearly shouted, “Sure looks like heroin to me!!” I told him twice, politely, to field test and lab test his ‘find.’ I also pointed out that, I would not ask him to retrieve my watch, If I had somehow stashed drugs with it. I point this out now, because I was initially told that I had been charged with possession of heroin. Here is that document, from July 5, 2006, a full week after my arrest. This is not part of the chain, but it will become significant. Initially, the drug was “heroin.” 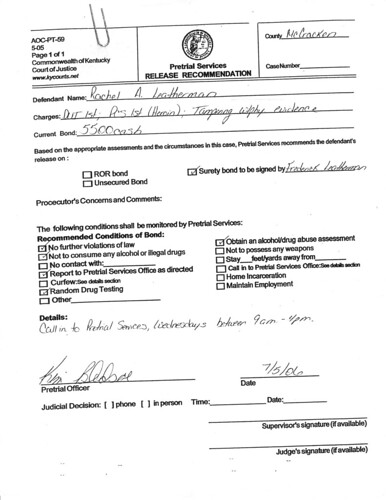 Now for the McCracken County Sheriff’s Chain of Custody. The title page: 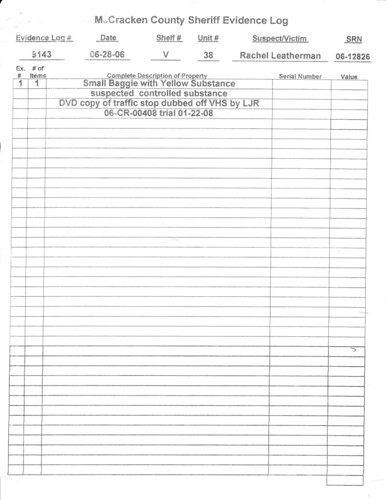 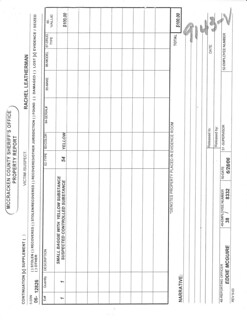 Next page, a uniform offense report. 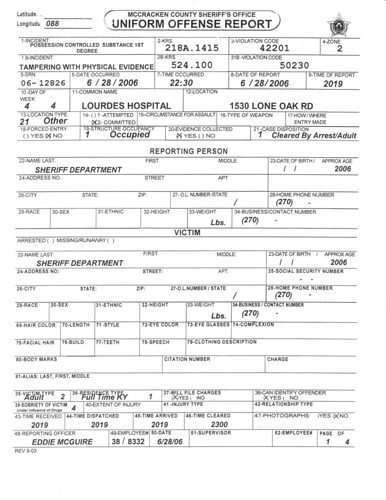 Note that there is no DUI listed, although the arresting deputy, Eddie McGuire, describes the “Sheriff’s Department” as the “Victim” and notes that the “Victim” is “under the influence of drugs.” The DUI, in fact, was added in the next day.

Next page, a narrative: 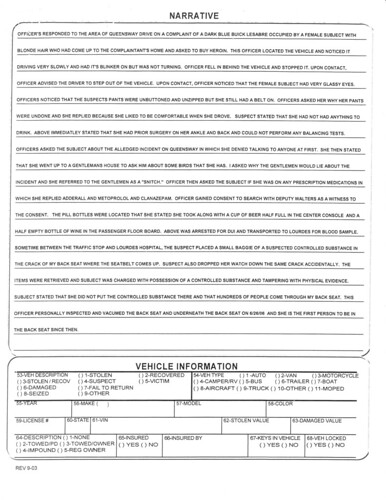 You might note that the ‘asking to buy heroin’ was not related in the 911 call, or the dispatch recording, or in the caller’s written statement the next day. We will be uploading all of these documents as well as footage, in future posts. Also, I’ll upload the dash cam arrest video of the roadside stop and search, and you can decide for yourself if my pants are unbuttoned and unzipped. Notable, he says, “Officer fell in behind the vehicle and stopped it.” Remember the Court of Appeals? They concluded that I stopped the cop. That is because the deputy told a brand new and entirely different account at trial 18 months later, when his off memory had had a good deal of time to improve.

Next page, the narrative is typed: 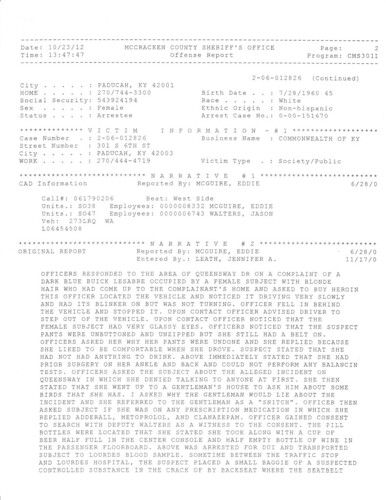 You may note that the officer alludes to the idea that I lied about my orthopedic surgery, which was the result of a 30-foot fall, just two years prior. I’ll take care of that right now. Here is the xray of internal fixation to my right calcaneus. This photo is not part of the chain of evidence, but it is significant, because at trial, the jury was told that I refused all sobriety testing, even though my blood was sent to at least two labs. Chemical tesding of the blood in Kentucky, is considered a refusal in my case, but not in the Kentucky statutes. 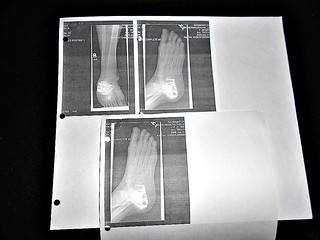 Last page of the typed narrative: 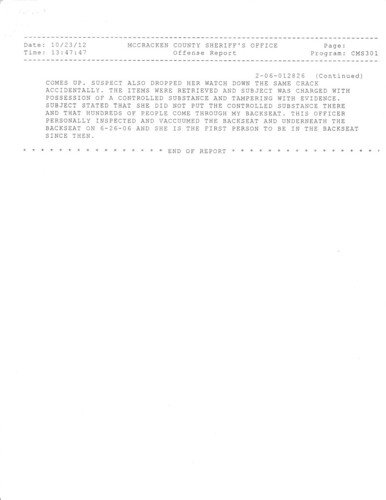 Couple of significant things here. Note that he makes no mention of the DUI here. Also on the vacuuming. He testified in various hearings, that he vacuumed the day before, two days before, or the week before, or at Officer Terry Long’s house, or at the car wash, depending on the day and the version. He was never confronted on these inconsistencies by my trial lawyer, Department of Public Advocacy Director for Western Kentucky Chris McNeill, the most deceitful, worst lawyer in America.

Next page in the chain, the Offense Report: 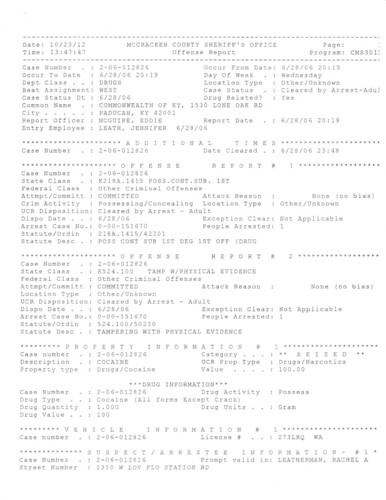 Note again, no mention of a DUI. What is significant is, there is a weight, and this is the first document that lists any weight. The item weighs “1.000 Grams.” The item’s description? “Cocaine (all forms but crack).” This form was typed on the night of my arrest. However, as you saw in the document above, my charge is “possession of heroin.” 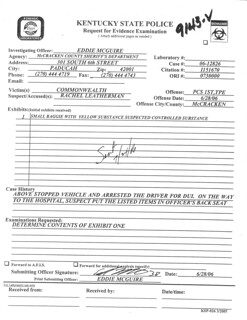 You will note that there is handwritten on this page “Sent 7/24.” The item sat, for a month, before it was “sent” anywhere. Recall that 7/24 was, coincidentally, the very same day that my blood result was faxed to the Commonwealth, indicating 0.00 alcohol, in my blood. Also recall that, four days later at the Grand Jury, the Commonwealth suborned perjury, claiming that no labs were available, and that I smelled of alcohol, and was “very unsteady” on my feet. During that month, both a preliminary hearing and a Grand Jury hearing had taken place. At the Grand Jury, the deputy said, “It’s gonna be crack.” A field test had ruled out heroin. So the heroin, that turned into Cocaine (all forms but crack) is now “gonna be crack.”

The next document is a typed sheet of paper that is not signed or filled out, nor is it an official form. 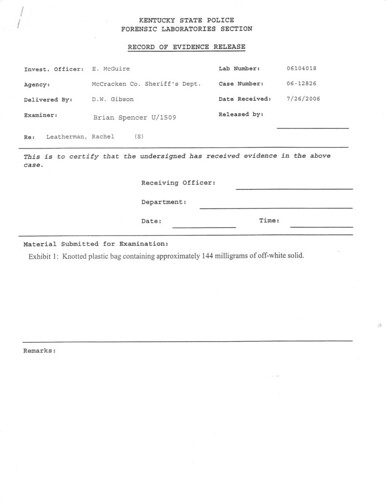 The Kentucky State Police lab forms are notable for their indication of the type of form, at the bottom right hand corner of the form. That is missing, from this typed sheet of paper.
What is interesting is, it appears that a deputy DW Gibson, delivered the item to the lab, two days after it was sent, on 7/24. The item arrived on 7/26. That’s two days later. The lab that the item was sent to is in Madisonville, a little over an hour from here. Where it spent the two nights is unknown. Also, when it arrived at the lab, it had changed color, from yellow to off white, and more significant- It lost 86% of its weight. It weighed 1.000 Grams in Paducah. On arrival in Madisonville, it weighed 0.144 Grams. Also, now it is a solid, but in Paducah it was powder. Plus, there is no signature whatsoever to indicate that the item was released from the lab, to return to Paducah. The typed sheet of paper is blank, for the most part.

Somehow, it made its way back to Paducah, we have no idea how, but the next document indicates that the arresting deputy checked the item out, for some unexplained reason, on January 16, 2008. That is seven days before my trial: 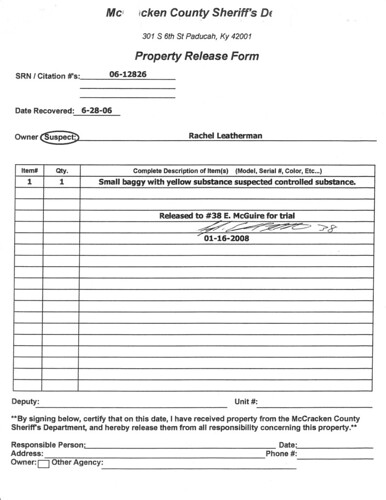 Released for trial- one full week before the trial, that included a weekend. Where was it? How much did it weigh? We have no idea. It could have been anywhere, including the officer’s back seat, his pocket, his refrigerator…We will return to the subject of January 16, in future posts, because as it turns out, that was a busy day. A busy busy day of photo-taking, emails back and forth, and phone calls. We will get to that.

Curiously, in October of 2012, six years after my arrest, and after I had served time, the item was still available. Oddly, the field test kit that was negative for heroin was also available, in the sealed bag, so I took photos at the Sheriff’s office.
Photo one: 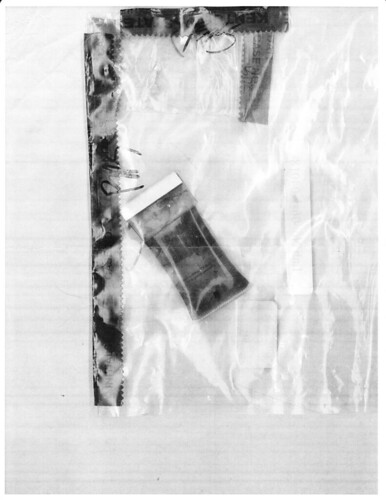 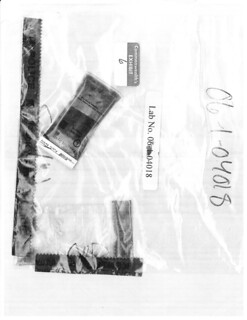 What do you guys think about this chain of ‘evidence?’