Featuring: Malisha is in the House with a Tale worthy of the Mullah Nasrudin

I love humor, especially dark humor, because it helps to keep me sane in troubled times and we are in troubled times. George Zimmerman’s incomprehensible and indefensible murder of Trayvon Martin is but one of many examples of the insanity in which we find ourselves. We cannot pretend that it isn’t there because pretending will not banish it from our lives. Fear, hatred and blaming the other only adds to our problems.

Like it or not, we are being inexorably forced by the growing disorder in our lives to acknowledge that we, collectively speaking, are the problem and the solution. We have a lot of bad ideas that manifest daily in senseless acts of violence on an individual and global scale.

We have run out of room to hide from each other here in the fabled and symbolic Garden of Eden that we call Earth.

Each of us is a part of the problems and the problems we face are bigger than any one person can solve. Yet, there are solutions apparent to anyone with eyes to see.

We are going to have to work together on a global scale to create peace and harmony, but the path begins at home, which is our very own self.

Pain is pain, but humor softens it and Malisha is quite accomplished at seeing humor in tragedy. Here, she recreates George Zimmerman’s pathetic tale of searching for an address to conceal that the real address he is searching for has materialized into a person whom he is hunting.

He will find him, but he will not find the answer he seeks.

Um, Hello, this is George again. I have some addresses for you now.

Sean: Are these addresses where the guy is?

George: No, he ran. These assholes always get away. These are addresses where he is NOT.

Sean: OK, so what is your address George?

George: To be honest with you, I have a bad memory. Could we just skip to the addresses where the suspect is NOT? Because I remember THEM, now, and I don’t want to go back to my truck because then I’ll forget again.

George: Firssssst, one one, one oh, uh, Retreat View Circle, uh, tell them to go left, and…

George: Yeah, and he’s not there.

Sean: OK, where else isn’t he?

Sean: George? Are you there?

Sean: Wherever you are now?

George: Just tell them to call me, OK?

George: Uh…well numbers all around, flying by, up and down,
Some as slow as Christmas coming, Some like the speed of sound, And we all wonder, what they mean, The highs, the lows, the in betweens, Most of them mean absolutely nothing But some of them mean everything…

Sean: George, do you see the suspicious guy?

George: Negative. Lost visual on the suspect. Sing a song of sixpence, pocket full of rye, four and twenty blackbirds baked into a pie,…

Sean: George, do you still want the officers to meet you there?

The Importance of Laughter During Trying Times 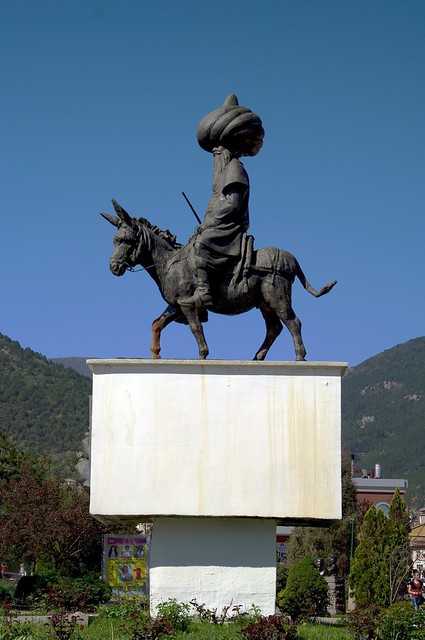 I dedicate this article to all who struggle to make a better world, and that includes all of us who seek justice, not just for Trayvon Martin and the harmed, but for George Zimmerman and the people who harm others.

As we rise and fall ever turning on the karmic wheel, let us never forget to laugh.

I love the Mullah Nasrudin stories. They make me laugh and comfort me in troubled times.

Watch out! Their deeper meaning reverberates.

The Mullah Nasruddin was invited to deliver a sermon. When he reached the pulpit, he asked the people,

“Do you know what I am going to say?”

“I have no desire to speak to people who don’t even know what I will be talking about!” the Mullah said, and he turned his back to the people and left the building.

Feeling extremely embarrassed, the people invited him back the next day. This time, when he asked the same question, they replied, “yes.”

Nasruddin said, “Well, since you already know what I am going to say, I won’t waste any more of your time!”
As he had done the previous day, he turned and left the building.

Now the people were really perplexed. They decided to try one more time and once again invited the Mullah to speak the following week.

As expected, he asked the same question, “Do you know what I am going to say?”

The people were prepared, so half of them answered “yes” while the other half replied “no.”

Without missing a beat, Nasruddin said, “Let the half who know what I am going to say, tell it to the half who don’t.”

Then he turned and left the building.

One day Mullah Nasruddin lost his ring down in the basement of his house, where it was very dark. There being no chance of his finding it in that darkness, he went out on the street and started looking for it there. Somebody passing by stopped and enquire:

– What are you looking for, Mullah Nasruddin ? Have you lost something?

– Yes, I’ve lost my ring down in the basement.

– But Mullah Nasruddin , why don’t you look for it down in the basement where you have lost it? asked the man in surprise.

– Don’t be silly, man! How do you expect me to find anything in that darkness!

A renowned philosopher and moralist, who was traveling through the Mullah Nasruddin’s village one day, stopped and asked him where there was a good place to eat. Nasruddin suggested a place and the scholar, hungry for conversation, invited Nasruddin to join him. Much obliged, Nasruddin accompanied the scholar to a nearby restaurant, where they asked the waiter about the special of the day.

“Bring us two,” they answered.

A few minutes later, the waiter brought out a large platter with two cooked fish on it. One fish was quite a bit smaller than the other.

Without hesitating, Nasruddin speared the larger of the fish and placed it in on his own plate.

The scholar, giving Nasruddin a look of intense disbelief, proceeded to tell him that what he did was not only blatantly selfish, but that it violated the principles of almost every known moral, religious, and ethical system.

Nasruddin calmly listened to the philosopher’s extemporaneous lecture patiently, and when he had finally lapsed into a ruddy silence, Nasruddin said,

“Well, Sir, what would you have done?”

“I, being a conscientious human, would have taken the smaller fish for myself.”

“And here you are,” Mullah Nasruddin said, and placed the smaller fish on the gentleman’s plate.