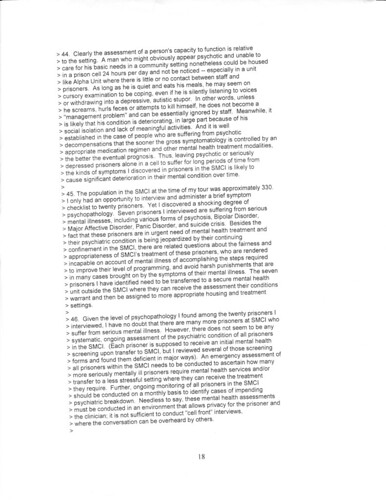 Our water system recently violated a drinking water standard. Although this incident was not an emergency, as our customers, you have a right to know what happened and what we did to correct this situation.

Trihalomethanenes, according to the letter are “four volatile organic chemicals which form when disinfectants react with natural organic matter in the water.”

My husband and I don’t drink alcohol, soda, juices, flavored drinks, or mixed powdered things. Just good, clean tap water, occasional tea and morning coffee. We thought. We never knew, that like alcohol, tap water has a 0.080 limit, and legally, according to the letter we just received, at 0.081 mg/L, our tap drinking water was at least for a time, contaminated.

But, according to the letter, 0.081 is “not an emergency.” So, what is an emergency? Could it possibly be the water that I’m 53 and look 80, that our teeth are going bad at an alarming rate, that we seem to be going blind, and every night, Fred ‘does’ his eyes? Without going into the gory details, his eye routine does not involve makeup, but it does involve me saying to him, “Oh, are you going to do your eyes now?” That’s how routine it has become, just like the box we have, labeled, “teeth,” that also has the ineffective mouth guard a dentist once suggested. But perhaps these are the normal routines of individuals who live with non-emergency environmental pollution.

We simply assumed that our area was afflicted with uranium hexaflurouride (UF6)-related toxins. We reasoned that USEC, the Gaseous Diffusion Uranium Enrichment Plant that closed a year ago that no one is allowed to speak about in Paducah lest you get shot in the face or arrested was still sneak-enriching uranium, or else Honeywell, across the river dropped some uranium accidentally during conversion- something like that.

We learned that when the West Virginia chemical spill happened that there really are hundreds of chemicals, toxins, and pollutants, and that the Ohio River, for example, could be more aptly named The River of Blood. Given the list of horrendous possibilities raising visions of the atomic era that earned Paducah the name “Atomic City,” we never once considered the simple possibility of a toxin hidden in plain sight in our drinking water. Therefore, I shall help out, with the Paducah Water Letter as follows:

What should I do?

There is nothing you need to do. You do not need to boil your water or take other corrective actions. Spit your remaining teeth out where no one is likely to step on them because sores never heal, especially on the feet. If a situation arises where the water is no longer safe to drink, notify an undertaker. You will be dead in 24 hours.

Believe it or not, the letter actually says this, word-for-word:

If you have a severely compromised immune system, have an infant, are pregnant, or are elderly, you may be at increased risk and should seek advice from your health care providers about drinking this water.

You can’t make this up.

Next sentence, no fingers crossed: “This is not an emergency.”

What does this mean?

This is not an emergency, unless you’re alive. If you are, there is nothing you can do about it anyway, except inform your neighbors. But it’s too late for that because everyone is a dead person walking. We waited six months to tell you these things in a letter so that anyone inclined to hire the likes of a functional lawyer from Tennessee and sue in Federal court, where, let’s face it, you’ll die while we out-wait you anyway, the six-month cushion will curtail those urges you may have to tie up our rigged dockets, while you spit your teeth out, onto the sidewalk.

Joking aside, there is a specific request in italics to share the letter, by putting it in a “public place,” so I have scanned it. The water company explains that it has flushed lines, changed disinfectant levels/types and performed additional tests. The company states that the tests have determined that its efforts have proven to be effective. Three times in the one-page letter, we are told, that this is not an emergency. It is also notable, given the likelihood that women may have conceived in the months since this information became known in January, that the letter did not become public until the end of May; indeed, it is impossible to notify one’s physician as the letter itself advises, if one is unaware of the problem.

Did you know that there are many unregulated contaminants in our drinking water, and that reports of issues continue in West Virginia?

note- This post is satire. Unrelated, as always, please have a look at the Decorah Eagles!

This entry was posted on Monday, June 16th, 2014 at 2:17 pm and is filed under satire. You can follow any responses to this entry through the RSS 2.0 feed. You can leave a response, or trackback from your own site.

9 Responses to The Paducah Water Letter