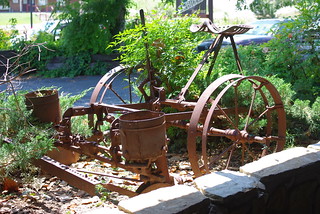 The mechanization ended after the planting of the kernels. The next task involved human hands that belonged to kids, for the most part. Once the corn plants were about two inches tall, the kids in the community crawled up and down the corn rows, inspecting each three-plant corn hill, taking visual inventory. We crawled down each row with a knife and a bucket of kernels, to see if three plants were in each cluster. Less than three plants in a hill meant that there was a cutworm in the soil, dining. We dug and chopped the worm, and replaced the eaten kernel with the new kernel. This task was called “replanting the corn,” and if you were a kid, you got that assignment. Replanting the corn was labor intensive and ritually performed every year. In church, farmers would ask each other, “Did you replant your corn yet?”

Another task where fingers did the work was ridding each individual potato plant in any given field of the potato bugs. Potato bugs are fat with orange stripes, and they can completely decimate a field of potatoes. We crawled up and down the rows with a tin can of coal oil that served as our insecticide at the time. We looked at each leaf, picked off the bugs and the masses of eggs, and dropped them into the can of coal oil. These were days before pesticides. In addition to coal oil for the bugs, we rubbed coal oil and bacon grease on our skin to keep the chiggers away. Again, our fingers did the work and like replanting the corn, potato bug removal was extremely labor intensive. 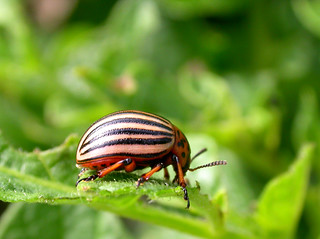 We were also always bottling the lambs. I do not ever remember a year when we weren’t nursing lambs behind the stove in the house. There was always a mama who had triplets or twins she didn’t like or that were born early in the cold, and we brought the orphans into the house and fed them out of bottles with rubber nipples. The lambs were tame and very hungry and they got strong in a hurry. They would butt their little heads against you, and when they were old enough to run, we sent them back to mama. We always had an area behind the stove fixed for the bottling of the lambs.

Perhaps the most difficult but the most pleasing job I did on the farm during those years was a winter job. In the off-season we repaired the gunny sacks for the wheat. There was no time to do this job in the summer; nobody had time to patch their sacks while tending to crops. Since we could not have the gunny sacks in the house, we would sit in the barn and patch the sacks using heavy thread and darning needles.

Also, we never worked on Sundays. My parents were Evangelical (not to be confused with evangelism), and they thought that it was a sin to work on Sundays. While we went to church when we could, we often did not go because we did not have the gas for the old car (although my dad sometimes took gas from the tractor), or because my mother did not have a dress for church. My mother took a nap on Sunday afternoons, but since my dad never napped, I got to spend more quality time with him on these days. He wanted me to know how to identify every tree and every bird, and during our Sunday afternoon walks we gathered walnuts and hickory nuts. My dad did not want me to miss any of the trees in the area, so on one of the rare occasions that we rode in the car, he stopped the car so that he could show me a wild cherry tree.

One day, we had a contest in the county to see who could identify the most leaves, and I won. I won a bible, because my kind and patient father had taught me to be a markings expert.

This entry was posted on Wednesday, May 28th, 2014 at 1:09 pm and is filed under Letty Owings, Missiouri Histiry. You can follow any responses to this entry through the RSS 2.0 feed. You can leave a response, or trackback from your own site.

One Response to Seasonal Farming Tasks in the Great Depression