West Virginia Chemical Leak and the Smell of Collusion

On Friday, January 17, 2014, as the chemical plume from the January 9 West Virginia chemical spill was passing through Louisville in the Ohio River, Freedom Industries, whose storage tank the chemical leaked from, filed Chapter 11 bankruptcy protection in federal court in Charleston, West Virginia.

The feeding frenzy of lawsuits in the wake of the spill involves many plaintiffs and two main defendants, Freedom Industries, who stored the chemical, and the water company, whose intake pipes are situated 1.5 miles downstream from Freedom. (Eastman Chemical (EMN), the Kingsport (Tenn.)-based manufacturer of the chemical has also been named in one lawsuit so far.)

In its bankruptcy filing, Freedom Industries claimed that AWK was to blame for the chemical leak from its (70-year-old uninspected) tank. Freedom advanced a theory, to explain why the water company was responsible for the visible hole in the chemical company’s storage tank. Paul M. Barrett, writing for Bloomberg Businessweek explains:

Freedom has a strategy for spreading the blame.

The company’s bankruptcy attorneys, led by Mark Freedlander of the Pittsburgh office of McGuire Woods, used Chapter 11 to float a theory designed to ease Freedom’s liability: ‘It is presently hypothesized that a local water line break [caused] the ground beneath a storage tank at the Charleston facility to freeze in the extraordinary frigid temperatures in the days immediately preceding’ what Freedlander delicately termed ‘the incident.’ Freedom further hypothesized that ‘the hole in the affected storage tank’ was caused by ‘an object piercing upwards through the base’ of the tank.

This happens all the time. The old water pipe-ground-expanding bomb thing. Every winter. In fact, as I type this, our faucets are cut on a bit because it is 15F outside; standing water in pipes can freeze and expand, compromising a pipe and breaking it. One time, a pipe in the ground outside did break. But I don’t remember any sort of phallic projectile protruding through the floor of this tiny modest apartment, which leaves me thinking that only really vulnerable structures succumb to underground water-propelled projectile object bombs. Like reinforced steel tanks engineered to hold thousands of gallons of toxic chemicals.

At any rate, AWK was not amused by this one hundred percent evidence-free filing in federal court, and on January 19, it fired back a response. Paul Barrett explains:

In its own filing dated Jan. 19 and made available yesterday, the West Virginia unit of the water company fired back. West Virginia-American Water accused the chemical supplier of concealing its true ownership, using a proposed emergency loan to put creditors at a disadvantage, and generally failing to provide the bankruptcy court with sufficient financial information about such matters as Freedom’s insurance coverage. The situation ‘smells of collusion,’ the water utility alleged in its court papers.

Collusion is people agreeing to do bad things together. What does the water company mean by this? Well it appears that Freedom Industries is 1) blaming the water company for the spill and 2) asking the court to approve a five million dollar loan from, well, J Clifford Forrest, to keep the company running, during the bankruptcy proceedings, and for the punchline 3) have priority over all of the other creditors, since it is lending the money. Forrest wants to transfer all of the assets from Freedom to another company that he owns and borrow money from it. The name of the other company escapes me, but it should be a household name by now because it has been around forever — since Friday.

So, Freedom Industries is wanting to keep the lawsuits on hold, transfer money from one pocket to the other to remain operational, and then blame the water company for its unfortunate and sudden onset of problems. AWK is calling bullshit. Paul Barrett writes:

Now West Virginia-American Water is alleging that the loan, which would require bankruptcy-court approval, is actually a disguised tool to manipulate the bankruptcy process. Without naming Forrest, the water company warned the court that Freedom’s owner is trying to use the loan to hold onto ‘those parts of the business that it deems valuable, abandoning the rest, taking the going concern value from the debtor, and leaving the debtor and its many creditors “holding the bag.”‘

While the legal chemical slugfest unfolds in the courts, one cannot help but ponder a question Chris Hayes poses in the video at the top of this post. Who is responsible? Who is responsible for this “ongoing involuntary chemical experiment?” Since residents have reported smelling licorice before, some may argue that it is impossible for the water company not to have known it was delivering tainted water. Ultimately, however, the discussions seem to come back to an underlying problem and that is the push to deregulation. Through deregulation, some 84,000 industrial chemicals like MCHM have remained mysteriously under regulatory radar. 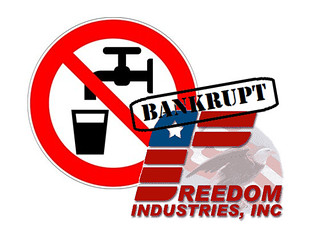 Paul M. Barrett for Bloomberg Businessweek is following this story. Here are three of his articles:

West Virginia Is Leaking Lawsuits, Too

The mugshot for the chemical, 4-methylcyclohexanemethanol, the coal-washing chemical that leaked, along with a brief description, is here.

This entry was posted on Wednesday, January 22nd, 2014 at 5:56 pm and is filed under Uncategorized. You can follow any responses to this entry through the RSS 2.0 feed. You can leave a response, or trackback from your own site.