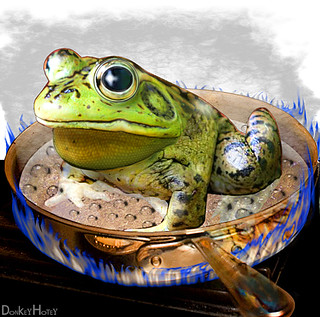 by Crane-Station. Author’s note: Frog Gravy is a depiction of daily life during incarceration, first in jails and then in prison, in Kentucky, during 2008 and 2009, and is reconstructed from my notes.

This post is about cost-cutting measures in prison, and it is not comprehensive because the topic is broad. I will discuss education and treatment cuts for Class D inmates as well as elimination of other programs, in another post.

Kentucky is laying off teachers during the holidays.They take jobs away from teachers so they can keep funding incarceration for War-On-Drugs inmates like me, Carol, KC, and my roommate Janelle. Carol had her heart attack this morning and she is in the hospital, toothless and disabled. KC had her heart attack last week and just got out of the hospital. Janelle can barely walk, is a borderline diabetic and has asthma, requiring oral medications as well as rescue inhalers.

The media will never tell the passing public that the children at war in Iraq are taking smiling photographs of themselves in front of blown up buildings in foreign countries and then sending them to their mothers in prison, to lessen the emotional burden of the mothers, and make them proud.

When the children are killed, the media will never show the coffins.

The media will never tell the passing public that when the mother gets out of prison and the son comes home from the bogus war that they will reunite and exchange sincere, empty blank stares with each other.

Seems like all the money goes to wars and prisons and then more wars and more prisons.

I am working landscaping, raking leaves and placing them into bags. I work this job in the bitter cold because I cannot stand to be inside after a year in the jails where I never saw a blade of grass. I wear several khaki shirts and two pairs of khaki pants, and a khaki jacket and a stocking cap that is called a toboggan. My eyes are beginning to heal from the harsh fluorescent lighting in the jails, where my body could not process Vitamin D, because I so rarely was allowed to be in a cage that was located outside in the sunlight. I put a towel over my head under the toboggan, but am told to remove it, because if my face is covered, I will be charged with felony escape, a charge that carries another five years.

I cut the toes out of my socks and wear the socks on my arms as arm warmers, and I cover them with my jacket sleeves so that I do not get a write-up. In here, a write-up is like an arrest on the outside, complete with an arraignment, a plea, legal representation from the ‘jailhouse lawyer’ department (which has inmates that are better ‘lawyers’ than the one I had in McCracken, I might add), a negotiation, and either some disciplinary action or a dismissal of the charges.

I remove the towel because it is not worth it. There are far too many other worthwhile risks. Like getting food to the birds, which is strictly forbidden and carries stiff penalties such as cell block time (time in the hole). I have priorities. That is why they call me Bird Lady in here.

At the end of the day, for the benefit of all workers in various jobs, the new cost-cutting measures are posted. Cost-cutting rule violation carries stiff penalties, of course. The list tell us:

1. We will be allowed only one glove, to clean the toilets.

2. On landscape, trash bags will be rationed and buckets will be used in lieu of bags.

3. Kitchen staff is to save and re-use their disposable hair nets.

4. Cookies, cake, slices of ham, patties and other food items will be counted and accounted for.

8. No more Styrofoam cups in the kitchen.

9. One-half of the prescribed amount of soap and sanitizer will be used to wash inmate dishes.

10. Kitchen workers will carry their own toilet paper to work.

11. Only one paper napkin per inmate. This will be controlled by hand-to-hand issue of napkins.

12. No refills on KoolAid. A guard will be assigned to the KoolAid dispenser to enforce this.

13. If an inmate uses the restroom labeled “inmate restroom” in the kitchen, she will receive a disciplinary write-up.

14. Applesauce will no longer be available as a substitute for iced cake and cookies, without a doctor’s order.

15. Snacks are only issued to insulin-dependent, and not diet-controlled diabetics.

I make an appointment with medical and see the doctor about the applesauce. (Rule #14)

At the appointment, I cite a lengthy and painful history of bulimia, state that I am in my twelfth year of abstinence, and report that iced cake and cookies are a trigger for me, and I do not want to relapse. I request the applesauce substitute.

My applesauce request is denied.

A friend of mine, Rosie, works in the kitchen, and I find her, and we set up the following long-term arrangement for bootleg applesauce: I will supply her with coffee and creamer, acceptable currency in the prison 15th-century black market bartering economy, and she will supply me with applesauce.

She even gets me fresh fruit on occasion.

And that is way more than I would have been allowed with a doctor’s order.

The heart attack inmates, however, will continue to eat iced cake and cookies because calories are cheaper than nutrition in this country. This state will continue to pack inmates into jails and prisons and then pack calories into the inmates, while sons and daughters are blowing up buildings in foreign countries, in wars that they cannot possibly understand.

There will be no media mention of inmate mothers with enlisted children. There will be no mention that these children had little choice but to enlist, because the family was broke, with one or both parents in prison.

While inmates eat iced cake, the sons and daughters in the wars eat Meals Ready to Eat (MRE’s), provided by the military.

This entry was posted on Sunday, August 25th, 2013 at 6:49 pm and is filed under Frog Gravy. You can follow any responses to this entry through the RSS 2.0 feed. You can leave a response, or trackback from your own site.