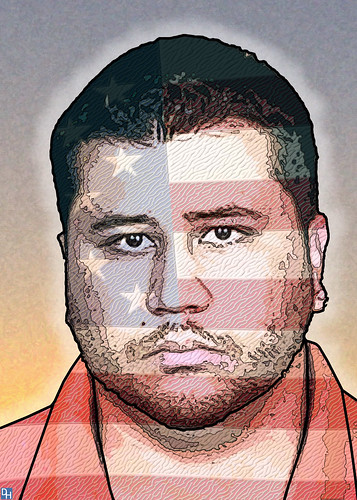 Late yesterday the prosecution released the Sanford Police Department video reenactment of the shooting, starring George Zimmerman. They shot the video the day after the shooting.

Go here to see the video.

The first thing I noticed was two giant butterfly bandages attached to the back of Zimmerman’s head. A couple of flaps and he would have been airborne, if they had been actual butterfly wings. Just what he needed to cover a couple of scratches that did not require any stitches, right?

The third thing I noticed is that his description of the confrontation makes absolutely no sense because he claims that after Trayvon punched him in the nose knocking him down, Trayvon got on top of him and was using both hands to cover his mouth and nose to prevent Zimmerman from shouting for help. Yet, even with both of his hands free, Zimmerman claimed only to have attempted to wiggle and slide his body farther underneath Trayvon and away from the concrete sidewalk, thereby inadvertently exposing the gun he was carrying in his waistband hoster. That’s when Trayvon supposedly declared,

One of us is going to die tonight.

Unfortunately for Zimmerman, however, no blood was detected on Trayvon’s hands or in his fingernail scrapings, which is odd since Zimmerman’s nose was bleeding.

Zimmerman said he felt Trayvon’s hand sliding down the right side of his chest toward the gun, but Zimmerman somehow beat him to it, pulled it out of the holster, and shot Trayvon once in the torso as Trayvon was straddling him and leaning over.

Zimmerman did not explain how Trayvon would have been able to see his gun from his position straddling Zimmerman’s body. Apparently, Trayvon was such a vicious and superhuman thug that he could see through Zimmerman’s clothes and legs.

Unfortunately for Zimmerman, however, the bullet must have changed course somehow in the 2 to 4 inch distance between the muzzle of his gun and Trayvon’s chest because it entered Trayvon’s chest 1 inch to the left of the midline and 1/4 inch below the left nipple. It traveled straight through from front to back without deviating up or down, left or right and exploded the right ventricle of the heart and right lower lobe of the lung, collapsing both of his lungs (See page 125).

Odd too that no high velocity blood spatter blowback from the shot impacted Zimmerman’s jacket front or sleeves, according to the crime lab.

Trayvon then sits up and says, “You got me,” like he just lost a poker hand instead of having his right ventricle and the right lower lobe of his lung exploded by a bullet. Odd that Trayvon was able to push air through his vocal cords when both of his lungs were collapsed.

Trayvon then either slumps forward or Zimmerman pushes him aside — he does not recall which — so that Trayvon ends up lying face down. Zimmerman climbs on top of him, straddling him. Then he grabs both of Trayvon’s hands and stretches them out, so that Trayvon is in a Y-position. Meanwhile, his gun is just out of reach beyond Trayvon’s grasp, so he keeps restraining Trayvon — because that’s what you have to do to dead people — as he continues to call out for help.

Unfortunately for Zimmerman, however, no neighbors reported hearing any screams or calls for help after the shot.

A neighbor suddenly appears holding a flashlight and says he’s going to call 911, but Zimmerman tells him not to bother because he already called 911 and the police are on the way. He tells the neighbor he needs his assistance to restrain Trayvon, who, of course, is still dead.

Zimmerman then holsters his gun just before the cop arrives.

I am pleased to report that he did not claim to have blown his breath across the muzzle of the gun to dissipate any remaining gun smoke in the air before emphatically slamming it into the friendly confines of his holster.

Unfortunately for Zimmerman, Trayvon was found with both of his hands under his body, not stretched out in a Y position.

Given the location of Trayvon’s body and his phone, there is no doubt that the initial confrontation took place somewhere down the sidewalk, which runs between two rows of townhouses, in the direction of the home where Trayvon and his father were staying. That sidewalk forms a T-intersection with the sidewalk that provides a cut-through between two streets.

Zimmerman claimed that, after Trayvon ran, he got out of his vehicle and walked down that cut-through sidewalk toward the next street over attempting to find an address that he could provide to the police dispatcher. When he was unable to find one, he retraced his steps intending to return to his vehicle, but Trayvon emerged out of the darkness and approached him from the intersecting sidewalk that runs between the two rows of townhouses.

That story is not true.

Since we know the confrontation took place along the sidewalk that runs between the two rows of townhouses, we have to ask ourselves, why did Zimmerman tell a different story?

Does anyone think he lied to conceal that he followed Trayvon down that sidewalk between the townhouses and he does not want anyone to know that?

Why conceal that, unless he ignored the dispatcher’s request not to follow Trayvon, he followed him, and he confronted him?

Does anyone really think George Zimmerman did not know the names of the streets and the addresses in his own neighborhood, the neighborhood he patrolled as a volunteer neighborhood watch captain?

I think he intended to find Trayvon, confront him, and restrain him until the police arrived. I think Trayvon ran from him again when Zimmerman found him while he was talking to his girlfriend DeeDee on his cell phone.

I think he tackled Trayvon up near the T intersection and probably hit the back of his head during the take down.

I think Trayvon hit him in the nose in self-defense

Trayvon was the person screaming for help and he stopped screaming when Zimmerman shot him, his heart exploded, and both his lungs collapsed.

UPDATE: Commenter JD corrected me regarding the location of Trayvon’s phone. It was found next to his body at the position designated with a 7 on this Google Earth satellite photo of the crime scene that JD prepared. Although we have not yet seen the GPS/total station prepared by the police, I suspect there will be little difference between them.

The bottom line is Trayvon’s body and the debris field is too far down the sidewalk between the two rows of townhomes from the T intersection to support Zimmerman’s claim that Trayvon confronted him and knocked him down up at the T intersection.

Special thanks to JD for correcting my mistake.

This entry was posted on Thursday, June 21st, 2012 at 6:08 pm and is filed under George Zimmerman, Trayvon Martin, video reenactment of Martin shooting. You can follow any responses to this entry through the RSS 2.0 feed. You can leave a response, or trackback from your own site.