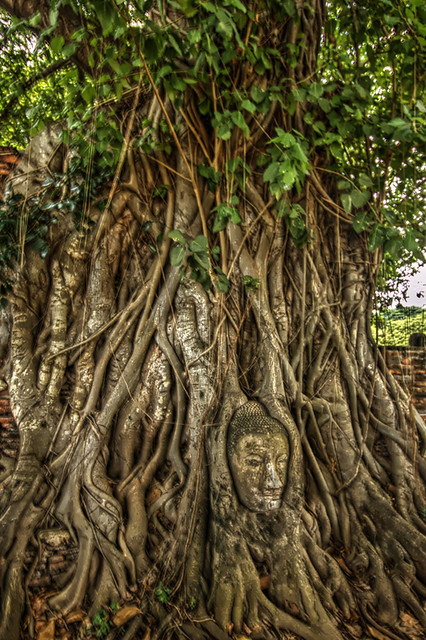 Bodiless Buddha in a Bodhi Tree

Archaeologists discovered in 2010 a stone stele or free standing stone slab with a carving on one side in an ancient Buddhist monastery in Mes Aynak, Afghanistan, which is approximately 25 miles (40Km) east of Kabul.

Professor Gérard Fussman, a professor at the Collège de France in Paris examined the stele recently and he believes it depicts the young Prince Gautama Siddartha before he abandoned a life of royal wealth and privilege to seek enlightenment. We know of him today as the Buddha, who founded Buddhism.

Standing 11 inches (28 centimeters) high and carved from schist — a stone not found in the area — the stele depicts a prince alongside a monk. Based on a bronze coin found nearby, Fussman estimates the statue dates back at least 1,600 years. Siddhartha lived 25 centuries ago.

The prince is shown sitting on a round wicker stool, his eyes looking down and with his right foot against his left knee. He is “clad in a dhoti (a garment), with a turban, wearing necklaces, earrings and bracelets, sitting under a pipal tree foliage. On the back of the turban, two large rubans [are] flowing from the head to the shoulders,” writes Fussman in his new book. “The turban is decorated by a rich front-ornament, without any human figure in it.”

To see the stele and a photograph of the ruins, go here.

Professor Fussman believes the stele depicts the young prince because of the iconography of the stele and the pipal leaves. He also believes the stele was used by a monastic cult that was dedicated to the worldly prince before he achieved enlightenment. According to their monastic code, they transported the stele in a wagon during a procession.

Professor Fussman has published a book about the stele, The Early Iconography of Avalokitesvara” (Collège de France, 2012).

This entry was posted on Saturday, June 9th, 2012 at 3:31 pm and is filed under Saturday Art, Siddartha stone stele. You can follow any responses to this entry through the RSS 2.0 feed. You can leave a response, or trackback from your own site.